In his day, Steve Reeves was one of the most popular stars in the world. He was born in Montana and moved to California at the age of 10.

By the time he was 17 he had developed a Herculean build, long before the rise in general interest in bodybuilding.

Never really known as a gym rat, Steve's personal philosophy was to train hard, then forget training and be a normal person who happened to have the adjunct of muscle... a very sane philosophy, indeed!

His bodybuilding titles include:


By his own account, his best cold measurements at the peak of his bodybuilding activity were:

Reeves was known for his V-taper and for the great width of his shoulders, which measured at 23 1/2'' (59.7 cm) using outside calipers.

By (the 1940s) the distinction between lifting weights purely for strength and training with weights to shape and proportion the body had been clearly made. ...However, bodybuilding still remained an obscure sport. No champion was known to the general public--that is, until Steve Reeves came along. Reeves was the right man at the right time. He was handsome, personable, and had a magnificent physique. Survivors from the Muscle Beach era recall how crowds used to follow Reeves when he walked along the beach, and how people who knew nothing about him would simply stop an stare, awestruck.

In the late 50's, Steeve Reeves became a movie star and starred in many adventure films, such as Hercules and The Thief of Baghdad. That is how he caught my attention as a little boy. I was fascinated by his heroic physique long before I picked up bodybuilding myself.

Later in life, Reeves promoted drug-free bodybuilding and bred horses on his ranch in California.

To me, Steve Reeves remains the ultimate natural bodybuilder, epitomizing all the good that comes with our sport, such as beauty, strength, health and longevity. 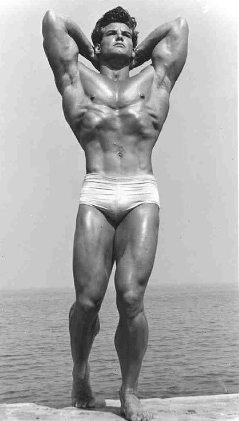 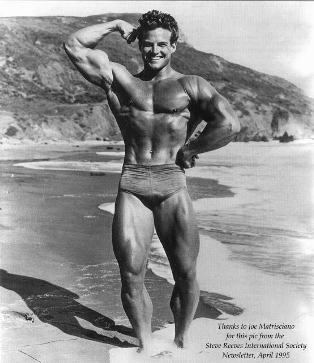 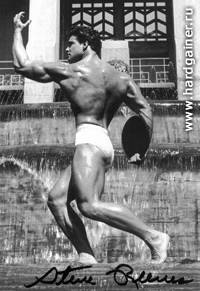 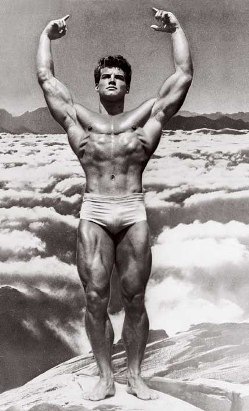 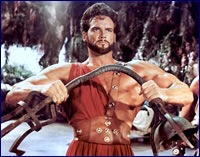